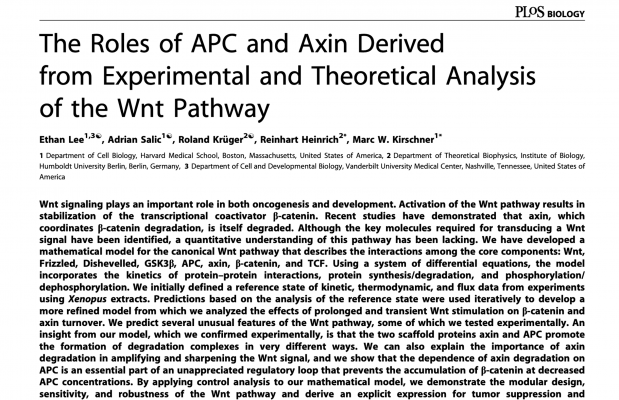 Wnt signaling plays an important role in both oncogenesis and development. Activation of the Wnt pathway results in stabilization of the transcriptional coactivator b-catenin. Recent studies have demonstrated that axin, which coordinates b-catenin degradation, is itself degraded. Although the key molecules required for transducing a Wnt signal have been identified, a quantitative understanding of this pathway has been lacking. We have developed a mathematical model for the canonical Wnt pathway that describes the interactions among the core components: Wnt, Frizzled, Dishevelled, GSK3b, APC, axin, b-catenin, and TCF. Using a system of differential equations, the model incorporates the kinetics of protein–protein interactions, protein synthesis/degradation, and phosphorylation/ dephosphorylation. We initially defined a reference state of kinetic, thermodynamic, and flux data from experiments using Xenopus extracts. Predictions based on the analysis of the reference state were used iteratively to develop a more refined model from which we analyzed the effects of prolonged and transient Wnt stimulation on b-catenin and axin turnover. We predict several unusual features of the Wnt pathway, some of which we tested experimentally. An insight from our model, which we confirmed experimentally, is that the two scaffold proteins axin and APC promote the formation of degradation complexes in very different ways. We can also explain the importance of axin degradation in amplifying and sharpening the Wnt signal, and we show that the dependence of axin degradation on APC is an essential part of an unappreciated regulatory loop that prevents the accumulation of b-catenin at decreased APC concentrations. By applying control analysis to our mathematical model, we demonstrate the modular design, sensitivity, and robustness of the Wnt pathway and derive an explicit expression for tumor suppression and oncogenicity.