Systems analysis of metabolism in the pathogenic trypanosomatid Leishmania major 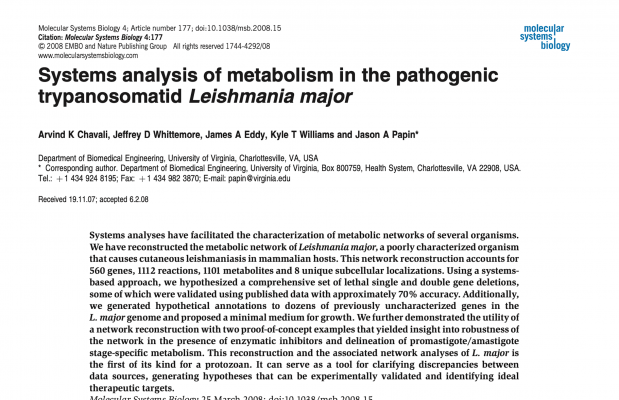 Systems analyses have facilitated the characterization of metabolic networks of several organisms. We have reconstructed the metabolic network of Leishmania major, a poorly characterized organism that causes cutaneous leishmaniasis in mammalian hosts. This network reconstruction accounts for 560 genes, 1112 reactions, 1101 metabolites and 8 unique subcellular localizations. Using a systems- based approach, we hypothesized a comprehensive set of lethal single and double gene deletions, some of which were validated using published data with approximately 70% accuracy. Additionally, we generated hypothetical annotations to dozens of previously uncharacterized genes in the L. major genome and proposed a minimal medium for growth. We further demonstrated the utility of a network reconstruction with two proof-of-concept examples that yielded insight into robustness of the network in the presence of enzymatic inhibitors and delineation of promastigote/amastigote stage-specific metabolism. This reconstruction and the associated network analyses of L. major is the first of its kind for a protozoan. It can serve as a tool for clarifying discrepancies between data sources, generating hypotheses that can be experimentally validated and identifying ideal therapeutic targets.