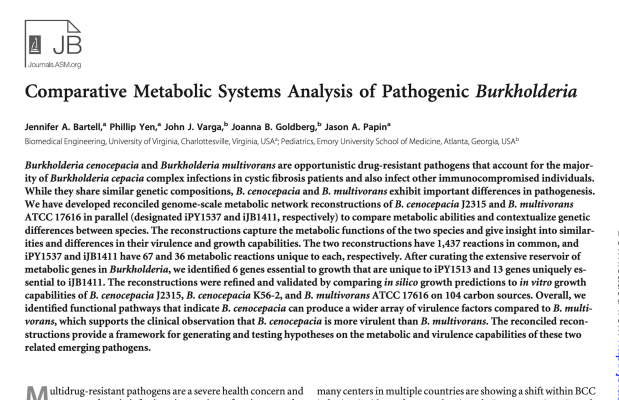 Burkholderia cenocepacia and Burkholderia multivorans are opportunistic drug-resistant pathogens that account for the major- ity of Burkholderia cepacia complex infections in cystic fibrosis patients and also infect other immunocompromised individuals. While they share similar genetic compositions, B. cenocepacia and B. multivorans exhibit important differences in pathogenesis. We have developed reconciled genome-scale metabolic network reconstructions of B. cenocepacia J2315 and B. multivorans ATCC 17616 in parallel (designated iPY1537 and iJB1411, respectively) to compare metabolic abilities and contextualize genetic differences between species. The reconstructions capture the metabolic functions of the two species and give insight into similar- ities and differences in their virulence and growth capabilities. The two reconstructions have 1,437 reactions in common, and iPY1537 and iJB1411 have 67 and 36 metabolic reactions unique to each, respectively. After curating the extensive reservoir of metabolic genes in Burkholderia, we identified 6 genes essential to growth that are unique to iPY1513 and 13 genes uniquely es- sential to iJB1411. The reconstructions were refined and validated by comparing in silico growth predictions to in vitro growth capabilities of B. cenocepacia J2315, B. cenocepacia K56-2, and B. multivorans ATCC 17616 on 104 carbon sources. Overall, we identified functional pathways that indicate B. cenocepacia can produce a wider array of virulence factors compared to B. multi- vorans, which supports the clinical observation that B. cenocepacia is more virulent than B. multivorans. The reconciled recon- structions provide a framework for generating and testing hypotheses on the metabolic and virulence capabilities of these two related emerging pathogens.